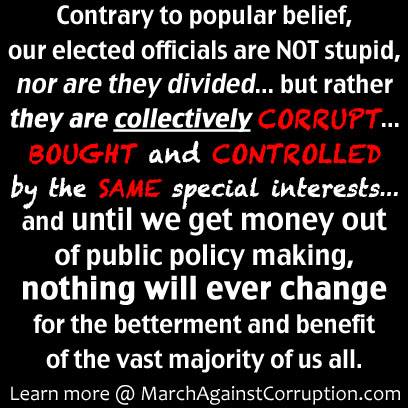 Until we all actively participate in our government, we will be treated as if we are morons and led around as sheep. Corporations have usurped our government and it no longer serves us but instead serves them. They have used the media to divide our population, causing us to blame each other instead of seeing the real culprits in this crime. As long as Liberals blame Conservatives, tea party blames Democrats, races blame other races, we will never resolve the real issues that need to be addressed in our economy, population, environment, and social issues. The sooner you quit letting other people (media) tell you who to blame – and spend some time in deep thought – which few people seem willing to do, the sooner we will start working together to resolve the most pressing issues of this dangerous time we live in. We are standing on a Precipice. If we ACT, we can prevent ourselves from falling. If we stand dumbfounded, the winds of time will make the decision for us – to our peril.